Experience Behind the Magic With ‘Prince Caspian’ on DVD 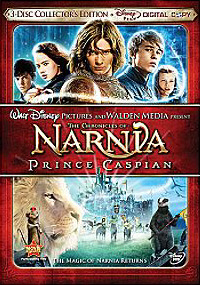 The second installment of C.S. Lewis’ timeless epic has now been released on DVD and Blu-ray Hi-Def, bringing the fantasy adventure that has enthralled millions into homes across America in time for the Christmas holiday. Packed with interviews, exclusive featurettes as well as deleted scenes, the “Chronicles of Narnia: Prince Caspian” DVD is sure to be a DVD you will want to add to your collection.

Get the Blue-Ray version and enjoy these additional features not available on the standard DVD:

While I myself would love to add this to my collection, I think I’m going to wait until all seven installments of The Chronicles of Narnia are completed and available in some sort of box set, just as I did with The Lord of the Rings trilogy.