Disney has recently launched D23, the first official community for Disney fans in the company’s 85-year history. Through D23, fans will go backstage and behind closed doors to get the inside scoop from every part of Disney, while experiencing the nostalgia, adventure and fantasy of Disney as never before. 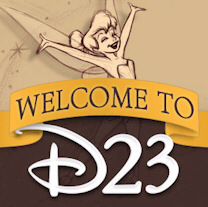 “We have a fantastic legacy that started in 1923 and is based on timeless stories, beloved characters and unforgettable experiences, but it’s our fans that keep the spirit of Disney alive year after year, generation after generation,” said Disney President and CEO Bob Iger at the Company’s annual shareholder’s meeting. “D23 is our way of saying ‘thank you’ and celebrating our fans, who bring the magic of Disney to life every day in every corner of the world.”

As a part of this new Disney fan experience, today also marks the launch of D23’s new quarterly publication, Disney twenty-three; the all-new D23 Web site at Disney.com/D23; and a new collectibles line, The Walt Disney Archives Collection, which was created specifically with D23 members in mind. D23 also will host special events for its members throughout the year, highlighted by the organization’s signature event, the D23 Expo, which will be held in Anaheim this September 10-13.

In conjunction with D23, Disney is launching its new quarterly publication Disney twenty-three, a hybrid entertainment and lifestyle magazine that is the all-access pass to discovering the magic of Disney’s past, present and future. Its name pays homage to 1923, the year The Walt Disney Company was founded.

The premiere issue of Disney twenty-three includes exclusive features such as:

D23 membership is not required to visit Disney.com/D23, but some merchandise and special event opportunities are exclusive only to D23 members.

Fans can join D23 at www.Disney.com/D23, all Disney Store locations within the United States, select shops at Disneyland Resort and Walt Disney World Resort, and www.DisneyShopping.com/D23.

The name “D23” pays homage to the wonder and excitement that began in 1923 when Walt Disney opened his fledgling studio in Hollywood. Through the years, Disney has captured the imagination of millions around the world, and, as requested by Disney fans everywhere, D23 gives them a greater, richer connection to the entire world of Disney by placing them in the middle of the magic.