If you are like me and love the many short films Pixar has made in conjunction with their full-length animated features, then you’ll want to mark your calendars for Wednesday December 2 at 7pm when ABC Family will air “Walt Disney Pictures Presents Pixar Short Films.” The airing will lead up to ABC Family’s annual 25 Days of Christmas event . 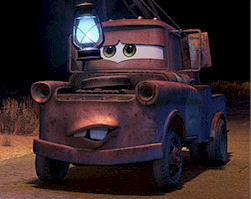 The short films included in the two-hour presentation include:

Adventures of Andre and Wally B.

There’s nothing like a restful nap in a pleasant wooded valley. But when Andre awakens and is greeted by a pesky yellow-and-black striped insect with a nasty stinger, he ends up taking a quick (and painful) hike. Andre thinks he’s a clever guy, able to outsmart and outrun a bee. But like all stinging insects, Wally B. knows better, and can chase down any target in a matter of seconds.

“Boundin'” features a freshly shorn lamb and a jackalope — the mythical horn-adorned rabbit of American western folklore. For the high-stepping lamb, life is an upbeat western waltz until his prairie friends tease him about his freshly sheared look. He gets down in the dumps after losing his lustrous coat. The only one who can see things right is the giant jackalope, who brings sunshine and optimism with him wherever he bounds. Irrepressibly optimistic, the jackalope comes on to the scene to cheer him up and put a dance back into his step. (2003 Academy Award® nominee for Best Animated Short Film) 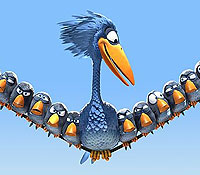 One by one, a flock of small birds perches on a telephone wire. Sitting close together creates problems enough, and then comes along a large dopey bird who tries to join them. The birds of a feather can’t help but make fun of him, and their clique mentality proves embarrassing in the end. (2001 Academy Award® winner for Best Animated Short Film)

An aging codger named Geri plays a daylong game of chess against himself in the park. Somehow he begins losing to his livelier opponent. But just when the game’s nearly over, Geri manages to turn the tables. There’s Geri. And then there’s the other Geri. You’d swear they were twins who didn’t get along since birth. In reality, it’s only one very old man who is young at heart and having a little fun with himself by faking a heart attack and finding new uses for his dentures. (1997 Academy Award® winner for Best Animated Short Film)

From Disney·Pixar’s 2004 Academy Award®-winning “The Incredibles” (Best Animated Feature Film) – this short finds Kari believing she’s in for a night of routine babysitting. Kari is prepared to provide neurological stimulation with some soothing musical accompaniment for little Jack-Jack, the smallest member of the Parr family. Little does she know that Jack-Jack will teach her a thing or two about babies with “special needs.” True to her word, Kari proves that she can handle anything that Jack-Jack can dish out – but barely. And Jack-Jack proves that listening to Mozart truly does make babies smarter… or in this case, discover their super powers.

Life on a shelf as a snowman trapped in a snowglobe blizzard can become wearing, especially when you’re surrounded by knickknacks from sunnier locales. When the jaded snowman finally breaks free of his glass house, his vacation plans are cut short. The touristy souvenirs on this shelf are true to life in their kitsch-ness: a disproportionate blonde from Miami beckons from a pool, a Death Valley skeleton invites people to surf the desert, and an Egyptian pyramid dons large sunglasses.

A baby lamp finds a ball to play with, and it’s all fun and games until the ball bursts. Just when the elder Luxo thinks his kid will settle down for a bit, Luxo Jr. finds another ball — ten times larger! Luxo Jr. has a great dad in the larger lamp. Even though he is a bit unpredictable, the elder Luxo gives him room to grow and explore. And the tiny light has no problem with that. (1986 Academy Award® nominee for Best Animated Short Film)

Mater and the Ghostlight

A companion piece to Disney·Pixar’s 2006 Academy Award®-nominated “Cars” (Best Animated Feature Film), this short finds Mater “haunted” by a mysterious blue light that teaches him not to play pranks on the other cars in radiator springs.

From Disney·Pixar’s 2001 Academy Award®-nominated “Monsters, Inc.” (Best Animated Feature Film) – this short film finds Mike discovering that being the top-ranking laugh collector at Monsters, Inc. has its advantages — in particular earning enough money to buy a six-wheel-drive car that’s loaded with gadgets. That new car smell doesn’t last long enough, however, as Sulley jump-starts an ill-fated road test that teaches Mike the true meaning of buyer’s remorse. Since ending the energy crisis in Monstropolis, this pair can still get into quite a predicament. Mike’s pride in his new wheels is only surpassed by Sulley’s lack of skills at the control panel. The two eventually agree on one thing — walking to work might be best, at least today. (2002 Academy Award® nominee for Best Animated Short Film) 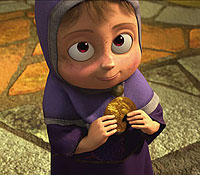 With one coin to make a wish at the piazza fountain, Tippy, a peasant girl, encounters two competing street performers who’d prefer the coin find its way into their tip jars. Tippy is caught in the middle as a musical duel ensues between the one-man-bands. (2005 Academy Award® nominee for Best Animated Short Film)

Life as the sole sale item in the clearance corner of Eben’s Bikes can get lonely. So Red, a unicycle, dreams up a clown corner and his own juggling act that steals the show. But all too soon, the applause turns into the sound of rainfall as reality rushes back. Red must resign himself to sitting in the corner and await his fate. Don’t let Red’s sale tag fool you. He’s really a priceless unicycle with a big heart that could help out juggling performers like lumpy the clown – if only someone would give him a chance.

Babies are hardly monster-like, unless you’re a toy. After escaping a drooling baby, Tinny realizes that he wants to be played with after all, but in the amount of time it takes him to discover this, the baby’s attention moves on to other things only an infant could find interesting. The secret’s out: curious crawling babies are what cause toys to become “lost” beneath furniture and behind dressers. But the tin musical toy, Tinny, isn’t like the other scared toys under the sofa. He knows his job is to make children laugh, not cry. (1988 Academy Award® for Best Animated Short Film)

Your Friend the Rat

From Disney·Pixar’s 2007 Academy Award®-winning “Ratatouille” (Best Animated Feature Film) – this short film finds Remy and his less than enthusiastic brother Emile presenting their case as to why humans and rats should just get along. Remy guides us through the shared history of man and the rat. Emile then provides many fun rat facts to help explain why the rat should be better appreciated. The two pull out all the stops and end with a song describing a rat and human Utopia. 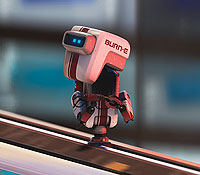 A companion piece from Disney·Pixar’s 2008 Academy-Award®-winning “WALL*E” (Best Animated Feature Film), this short features a welding bot on the Axiom Starliner named BURN*E, who, while repairing a light bulb, is locked out of the Starliner by WALL*E and Eve. He attempts to open the locked door, but finally realizes he cannot.

Dignity. Poise. Mystery. We expect nothing less from the great turn-of-the century magician, Presto. But when Presto neglects to feed his rabbit one too many times, the magician finds he isn’t the only one with a few tricks up his sleeves! Alec is a simple bunny. He doesn’t want fame or fortune. He just wants a humble dinner. Presto, the magician, however, lives for fame and fortune and is spiteful to anyone – or any rabbit – that stands in his way. Is there anything that could make Presto appreciate his poor, suffering bunny and give him the carrot he deserves? (2008 Academy Award® nominee for Best Animated Short Film)

A companion piece to Disney·Pixar’s 2006 Academy Award®-nominated “Cars” (Best Animated Feature Film), this short finds Mater part of a rescue squad that has to put out a blaze at the local Gasoline & Match factory. Unfortunately, Lightning McQueen is injured at this inferno and then has to be rushed to the hospital. But not to worry, Mater’s not just a fire truck, he’s also an MD.

A companion piece to Disney·Pixar’s 2006 Academy Award®-nominated “Cars” (Best Animated Feature Film), this short finds Mater as a famous daredevil car who does all kinds of stunts. And Lightning McQueen, a famous race car, becomes an unwilling participant in Mater’s greatest stunt ever.

A companion piece to Disney·Pixar’s 2006 Academy Award®-nominated “Cars” (Best Animated Feature Film), this short finds Mater as a famous bulldozer fighter in Spain. He’s so good, he’s able to fend off multiple bulldozers at once. Lightning McQueen joins mater in this tall tale just as things are at their worst.

A companion piece to Disney·Pixar’s 2006 Academy Award®-nominated “Cars” (Best Animated Feature Film), this short finds Mater meeting a cute little bucktoothed UFO named “Mator.” Mater takes him out for a night of fun and they quickly become best friends. But when Mator is captured by the military, Mater and Lightning McQueen come to the rescue.