Could Line Queues at Disney Theme Parks Be a Thing of the Past? 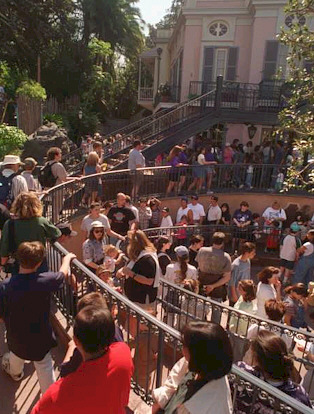 What is one of the worst things about visiting any amusement or theme park? Line queues – waiting and waiting and waiting for an attraction that lasts only minutes or in some cases, 17 seconds (Top Thrill Dragster – Cedar Point). To Disney’s credit, they have done the best job out of all amusement/theme parks in creating queues that ease the frustration and in many cases, help tell the story of the attraction itself.

What if line queues were to go away? Is it possible?John Frost at The Disney Blog wrote an interesting post on this very subject. In the post he makes reference to a new concept Disney is experimenting with – queue-less waiting zones. Apparently this concept was recently tested at Disney’s Hollywood Studios Rock-n-Roller Coaster.

In John’s own words:

Rather than feed guests into either a fastpass or standby queue, they hand the standby guests a boarding pass with a number on it. Fastpass guests proceed as normal and standby guests are herded into a holding area. The guest can’t leave the holding area during the wait, but there are games to play or other forms of entertainment to make the time fly by. Then when the time to board comes near their boarding pass number is flashed on a board and the guest has five minutes to report for their loading opportunity. This system doesn’t reduce waiting time for standby guests, but it does give Disney another opportunity to provide total guest satisfaction instead of a stressful wait.

This “queue-less waiting zone” idea was announced for the upgraded Dumbo attraction that will be part of the Magic Kingdom Fantasyland attraction. Could this be a new trend for all future attractions? Or may we even see the queue areas of old attractions re-engineered?

I can think of a few that certainly would benefit from this: The Submarines, Matterhorn, and Toy Story Midway Mania to name a few.

Then there are those attractions where the queues are almost as awesome as the rides themselves. How about the tunnel system at Indiana Jones at Disneyland? Roger Rabbit’s Cartoon Spin? The Tower of Terror?

While some attractions could certainly benefit from a “queue-less waiting zone,” I have to say that Disney does a better job with line queues than any other park in the world. If they are not setting the stage for the story that is about to be told, they are at least making the wait as comfortable as possible. You’ll rarely find this at Six Flags parks.

So, with this new concept in mind, what attractions do you the reader think would most benefit with a queue upgrade? What attractions would you never want to see Disney Imagineers change? Let your thoughts be known in the Comments section of this post.