Tickets for the 2nd D23 Expo to be held in August 19-21, 2011 in Anaheim, California go on sale tomorrow. You may be thinking that it’s a bit premature to buy tickets for an event that is still a year away but if you buy now, you can not only get tickets at a discount price, you can also assure that you’ll get tickets at all!

Last year’s first ever expo was extremely crowded so if you want to attend, I’d advise that you get tickets now. I’m sure the event will sell out quickly.

Below is the official press release from Disney which contains all the details. 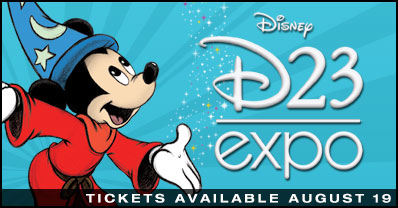 BURBANK, CALIFORNIA – The first-ever D23 EXPO in 2009 left Disney fans asking when there would be another. On Thursday, Aug. 19, D23: The Official Disney Fan Club begins ticket sales for the next adventure – an incredible three-day event that brings the entire world of Disney under one roof at the Anaheim Convention Center next Aug. 19–21.

In addition to these special advance-purchase savings, D23 Members can also buy new D23 EXPO VIP packages that are only available to members. These new packages offer incredible exclusive opportunities and will have very limited availability.

All D23 Members – both Gold level and Silver level – can take advantage of these exclusive admission savings and access to the special packages when tickets go on sale on Thursday, Aug. 19 at www.D23Expo.com .

The D23 EXPO 2011 will also feature the Disney Legends Awards – a tradition that pays tribute to the talented men and women who have made indelible contributions to the Disney legacy; the return of the D23 Live Auction boasting extraordinary rarities and specially designed items for Disney fans; an all-new Fan Art Contest themed to the 50th anniversary of One Hundred and One Dalmatians; Treasures of the Walt Disney Archives with an expanded exhibit of costumes, props and set pieces from Disney’s rich history; plus amazing live events, special celebrity appearances, panels and presentations, sneak peeks and unique experiences that celebrate the past, present and future of Disney. The D23 EXPO 2011 is scheduled to take place Aug. 19-21 at the Anaheim Convention Center.

Disney fans can become members of D23: The Official Disney Fan Club at www.disney.com/D23 , select shops at the Disneyland® and Walt Disney World Resorts and at www.DisneyStore.com/D23.