For the first time in its history, Disney is creating a film with an African-American princess. Princess Tiana’s story will come to the big screen later this year in the animated musical “The Princess and The Frog.” She is the first princess introduced by Disney since Mulan in 1998.

The doll representing the new princess will make its debut Monday at the American International Toy Fair in New York City. 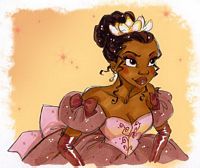 For Disney, it’s not just about being culturally and politically correct, it’s also about growing its lucrative — but aging — Disney Princess franchise in an ailing economy. Created in 1999, Disney Princesses had $4 billion in global retail sales last year.

Though Princess Tiana was on the drawing board long before Barack Obama was elected the nation’s first black president, marketing experts say she signals a growing awareness by industries from toymakers to cosmetic companies that diversity is critical in a nation where people of color will be the majority in little more than 30 years.

“It’s very significant,” says Lisa Skriloff, president of Multicultural Marketing Resources. “It’s like a stamp of approval for one of the most outstanding family (entertainment) companies to say this is important.”

Disney representatives say that they did not set out to make a social statement.

“It was much more about the storytelling,” says Kathy Franklin, vice president, global studio franchise development for Disney Consumer Products. “This was not about a conscious decision to say we need an African-American princess.”

Yet, industry watchers say that when Princess Tiana dolls hit stores in the fall, they will bring diversity to a marketplace where it’s been sorely lacking.

The doll itself will sport a tiara, a flowing blue gown, and is roughly the size of a Barbie. It is expected to sell for about the same $10 to $15 as Barbie brand dolls. Disney has hopes that it will boost the franchise through rough times.

Disney, which has had great success with its Princess franchise, predicts that sales will surge with the arrival of Tiana. “We expect our sales of Princess Tiana products to be significant, and not just to African-American households,” says Franklin.

Tiana merchandise will range from Halloween costumes to backpacks. There are plans for Tiana-theme MP3 players and digital cameras to be in stores by the end of the year, and a line of Princess Tiana and “The Princess and the Frog” books will go on sale this fall.