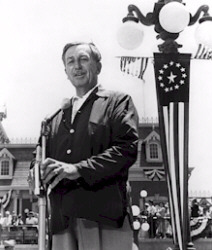 On July 18, 1955, Disneyland officially opened its doors in southern California.  Now, fifty-five years later, a rare gathering of Disney Legends, family members, former executives (2 Disneyland Presidents), Imagineers and other special guests will be gathering in San Francisco at the new Walt Disney Family Museum – many of whom will share their personal stories about working with Walt.

Unfortunately, tickets to these events are completely sold out. However, the @WDFMuseum will be live-tweeting from all three events! They will also be sending out a photo recap with highlights of our Disneyland 55 weekend.

The gatherings will be held in the Special Exhibition Hall of The Walt Disney Family Museum in Presidio, San Francisco.