The Haunted Mansion in Walt Disney World Florida is getting some new technology. A new exterior “Next Generation” queue is in the works and the end of the attraction itself has received a bit of a makeover. Both additions will add some interactivity to the famous attraction.

The new queue for the mansion has been expanded in two directions, into the hill that formerly served as the small cemetery near the attraction’s entrance and toward the Rivers of America. The new area will be home to four crypts, three of which will reportedly be interactive, with the gravestones appearing beyond the new crypt area. The queue is expected to wind between the crypts, though another rumor predicts that the crypts will be a diversion from the queue, similar to the “Next Generation” queue that opened recently at The Many Adventures of Winnie the Pooh. 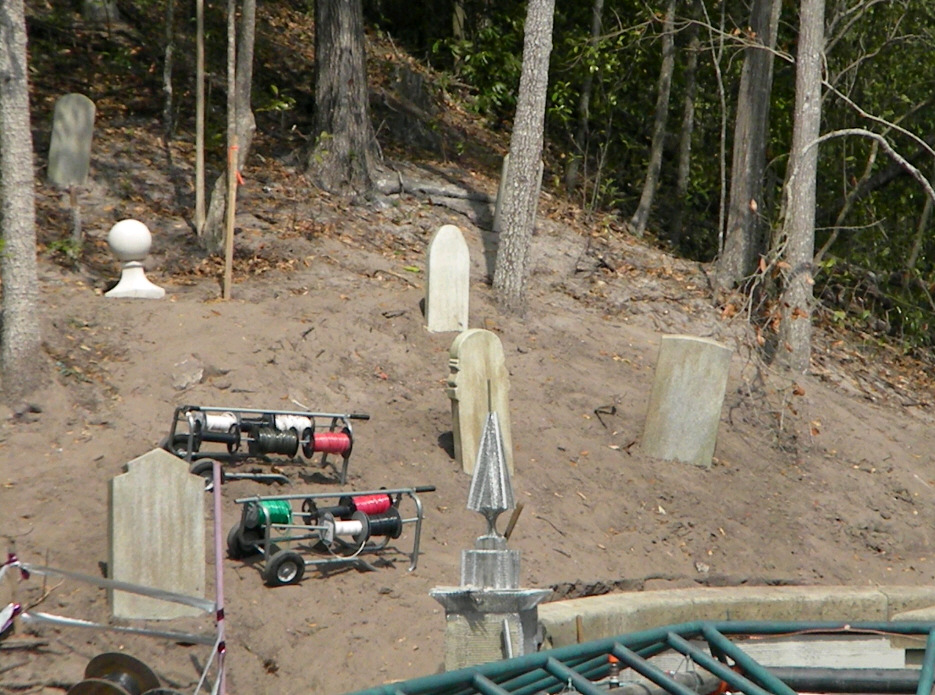 These gravestones on the new hill behind the original hill at the Haunted Mansion’s entrance are expected to be replaced by the original (or enhanced versions of the original) Imagineers’ tombstones. Note the reels of electrical wiring ready to be installed.Photo by J. Jeff Kober.

One of the crypts reportedly pays homage to the players of the instruments in the seance room, with images of their instruments carved into the side of the crypt, and may also include a tribute to the organist from the ballroom scene. A second is an homage to Phineas Pock, a long-storied name in the Haunted Mansion mythos and the name of the rightmost singing bust in the graveyard scene. A third interactive crypt’s subject is currently unknown. A fourth crypt, across from the three interactive ones, pays homage to the sea captain that was central to the original story of the Mansion.

Meanwhile, inside the Mansion, the hitchhiking ghosts in the final scene have been replaced with projections of the same ghosts on screens, both in the “hitchhiking” scene, and along the final stretch, where they appear in front of riders on a scrim instead of their previous location in the doombuggies themselves via a reflection. It is rumored that this is temporary while work takes place to update the existing animatronic and “Pepper’s Ghost” effects with new interactivity.

As to whether similar updates will come to the Anaheim mansion or even other Haunted mansions in Disney Parks remains unknown. These additions do reflect Disney’s ongoing goal to make attractions and even ques more interactive.