Legend has it that one day while Walt Disney was in the Disneyland park, he was very disturbed when he observed a Frontierland cast member walking through Tomorrowland in costume. In Walt’s mind, this completely destroyed a very magical element of the park, not only separating fantasy from the real world but separating the various “lands” within the park themselves.

So when plans for Walt Disney’s second theme park in Florida were being developed, the Imagineers decided to design a system of tunnels under the park so that cast members and service people can travel from land to land without being seen by guests and thus help keep the magic in place. It was deemed an ambitious project at first, however, the creators were able to realize their tunnel designs. These tunnels would come to be known ads “Utilidors” short for “utility corridors.” 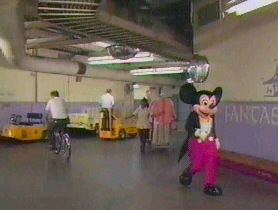 The first amazing fact about these “underground” tunnels is that they are not underground at all. While it is true they lie underneath the Magic Kingdom in Walt Disney World, they are actual on ground level. The Magic Kingdom is built on top of the tunnel system.

Hard to believe? Well, the next time you arrive at the Magic Kingdom, walk to the dock where the resort launches are and you can see an almost imperceptible rise up to Main St. Station. So the Magic Kingdom itself is actually the second level on top of the tunnel system. In fact, parts of Fantasyland and the Castle are actually on the third floor.

The main reason for this set up is due to the fact that the peninsula of Florida is actually floating on a water surface that is sometimes only a few feet down. That’s why there are no homes with basements in this area and why the Magic Kingdom tunnels are not actually underground.

When the Magic Kingdom was being built, Imagineers drained Bay Lake (a natural lake that existed on the property) and dug out the man-made Seven Seas lagoon that reside in in front of the Kingdom. All the silt and debris from Bay Lake and the material from the Lagoon were used to cover the pre-built utilidors, which are 15 feet high and raise the Magic Kingdom approximately 14 feet high. They used more than seven million cubic yards of earth in the process.

The tunnel infrastructure itself is about nine acres, with 392,000 square feet of space and looks something like the map below. 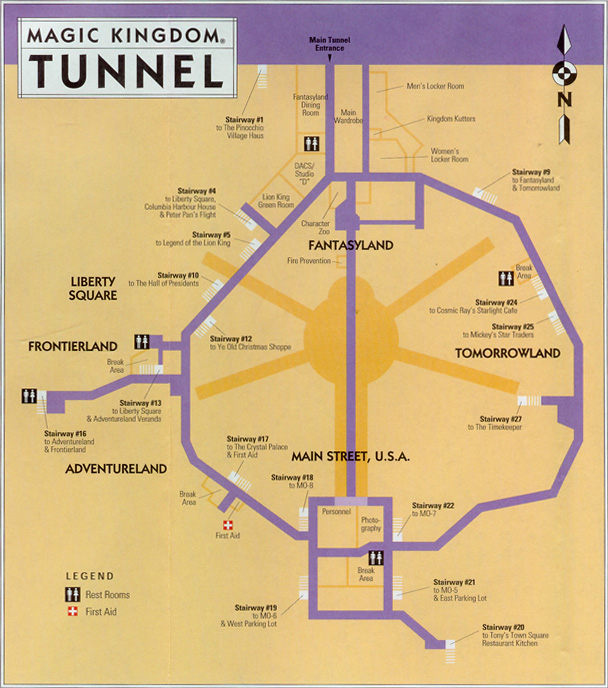 As you can see from the map detail, the tunnel system takes on an octagon shape with a central corridor running straight down the middle from Cinderalla’s Castle to the security offices at the front of Main St. There are access points all around the Kingdom with even some of the restaurants kitchens having their own access points.

For example, there are stairways under Columbia Harbor House, Pinocchio’s Village Haus, Hall of Presidents, Mickey’s Star Traders and many locations. Most of these hidden entrances are behind unmarked doors. One can literally reach all of the themed lands of the Magic Kingdom via this tunnel system with the exception of Mickey’s Toontown Fair which was built after the initial construction of this park.

Besides allowing cast members and service people to move from land to land out of sight of park guests, the utilidors contain all the major utilities, garbage disposal, locker rooms, offices, break rooms, employee cafeterias, and one of the most important rooms, the “DACS” control room.

This computer room called “Digital Animation Control System” controls everything in the park from making sure all the Audio-Animatronics figures are on cue in their respective attractions, to opening stage doors, curtains and park lighting. This invaluable system also monitors equipment failures, fire protection and watches for power losses anywhere in the park. The system is so sophisticated, that in just keeping all the Audio-Animatronics in sync, it monitors more than 72,000 functions every second.

The garbage system has its own magic. Developed in Sweden, the “AVAC” (Automated Vacuum Collection System) moves garbage through pneumatic tubes at 60 miles per hour to a central collection point located behind Splash Mountain where it is processed, compressed or recycled. There are access points all over the park and the garbage is actually “sucked” into the tubes. The vacuum is created by two motors and exhausts and the tubes themselves are 20″ in diameter.

The utilidors also allow for deliveries and food preparation. All deliveries are received, processed, and stored in the Utilidors until use. This ensures that guests do not see delivery trucks pulling up at the Magic Kingdom’s gate, nor do they see cast members carting merchandise through the park. The park’s cooking and preparation kitchens are housed in the Utilidors.

Finally, this elaborate tunnels system used to house over 1.2 million costumes used in shows and attractions. However, in 2005 Disney replaced the prior location with a larger facility that is located in the cast member parking lot.

Getting around the tunnels is done by foot or electric vehicles, which cast members call “Pargo’s”. No gas vehicles are allowed for obvious reasons with the exception of the armored vehicles that collect cash from the park’s earnings and emergency vehicles such as ambulances in cases of extreme emergency.

If you are like me and would like to see all this “magic” happening underneath guests’ feet, Disney offers a “Keys to the Kingdom Tour” which will take guests into the tunnels so they can see just how Disney makes the magic flow. This tour is very popular so if interested, plan on booking several weeks in advance. Also keep in mind that the tour is not given every day, so you will have to contact the park for a current schedule.