Insider’s Guide to Disney World is reporting that Disney’s Animal Kingdom is testing a new FastPass distribution system. The general idea behind the new system is that a central location will be provided within the park (actually, there are two at Animal Kingdom) to get FastPasses for each FastPass eligible attraction. 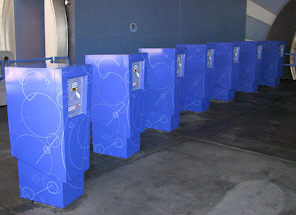 Before you get too excited, keep in mind that you can still only get one FastPass at a time, however with centralized locations you will not have to run all over the park to get your next FastPass. At this time you can also still go to each individual attraction to get FastPasses in the traditional manner.

The central distribution centers have FastPass distribution kiosks that indicate the ride for which it’s distributing FastPasses.  Currently the centralized kiosks do not indicate your return time until you actually get the FastPass.  This is still in the testing phase so that may come as an improvement if the new system proves effective.

Disney’s FastPass system will continue to be a free service, in spite of all other major amusement parks charging for a similar service.  In the meantime, Disney continues to play with the FastPass system to improve the guest experience with the passes. There’s even rumors of a cell phone/iPhone application for FastPass distribution.

Personally, I would love to see applications for cell phones. Or if the centralized system proves a success, I’d like to see them install centralized FastPass systems at each FastPass eligible attraction rather that individual ones.