If you have been to Disneyland in Anaheim recently, you most likely noticed the construction walls around the Rivers of America and even have spotted the drained riverbed while the attraction underwent a lengthy refurbishment. Now that the rivers are being refilled, the LA Times reveals what new and exciting changes guests to the park can expect to see. 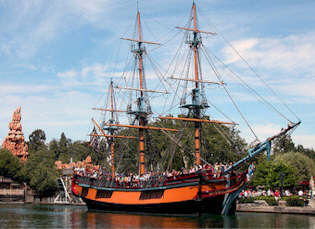 Refreshed riverbank scenes, a more concise plant palette and a newly focused storyline are just the beginning of additions and enhancements to this most beloved themed area of the park.

While mechanical refurbishments were put in place such as a new guide track for both the Columbia sailing ship and Mark Twain paddle-boat, Imagineers went back to the original concept art for the Rivers of America drawn by Disney artists Marc Davis and Sam McKim for inspiration for the enhancements that were added during this current rehab.

“Through the years, the river had grown rather eclectic,” said Walt Disney Imagineer Kim Irvine, who oversaw art direction of the rehab. “The scenes and sets didn’t really tell a clear story.”

Here are some of additions/enhancements that were made during the four month refurbishment:

The map below provides a glimpse of how this newly-themed land is laid out. 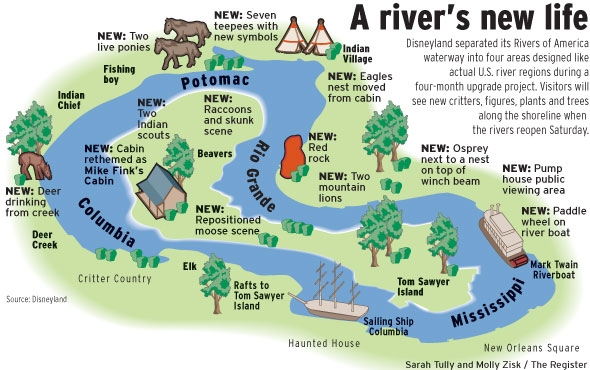 I’m sure the map will not do justice to seeing the changes in person. So, next time you visit the park, be sure to look for these changes.