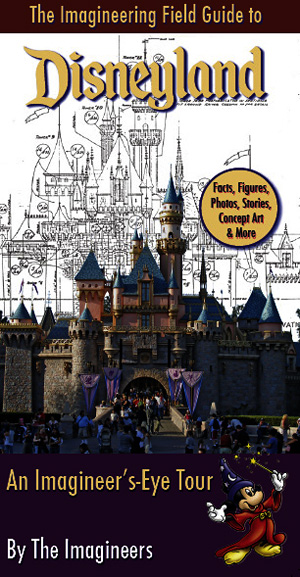 Have you ever imagined what it would be like to walk in the footsteps of Walt Disney himself during and after Disneyland was built? Now you can with a new pocket sized guide entitled “Imagineering Field Guide to Disneyland” which aims to answer the question, “What would it be like to walk through Disneyland with Walt by your side?”

The 128-page paperback takes readers land by land through the Anaheim theme park, offering anecdotes, history and trivia from Disney Imagineers as well as early concept art, sketches and schematics of many rides and attractions.

“From a process standpoint, it offers a bit of a peek behind the curtain of how we turn concepts into reality,” said Alex Wright, an Imagineer who gathered tales from his co-workers for the book. “In a way, there’s no one person who can tell you all these different stories. We have so many different disciplines.”

To research the book, Wright delved into the extensive Disney archives and toured the park with long-time Imagineers Tony Baxter and Kim Irvine. The hard part, Wright said, was deciding what to leave out.

“When it’s Disneyland, there’s always more to tell,” Wright said. “You could have told another 1,000 stories with all the history that’s gone on there.”

Designed to be read in the park, the “field guide” attempts to strike a difficult balance between appealing to first-time Disneyland visitors as well as life-long fans.

Brady MacDonald of Los Angeles Times who reviewed the book for an article offers some of his own personal favorite finds.

You can get the book on Amazon for $9.99. I’m hoping it is available at the park itself as I’ll be there next Thursday and Friday. And as this Disney fan is always hungry to learn the in-and-outs of the park, I’m looking forward to getting my hands on this little gem one way or another.