In honor of the irascible, cranky, mischievous, outrageous and very humorous Donald Duck’s birthday which just happens to fall on June 9, Disney’s D23 is commissioning an official portrait from those who know Donald best – his fans. 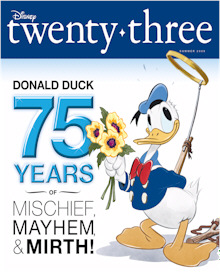 For the first time ever, Disney is turning to fans to create an official portrait of one of its biggest stars.

Finalists in the Donald Duck 75th Anniversary Portrait Contest will have their work unveiled and displayed at the inaugural D23 Expo, which will be held September 10-13 at the Anaheim Convention Center, adjacent to Disneyland.

The contest is hosted by D23: The Official Community for Disney Fans, and is open to all D23 Members who are 18 or older. Full-length oil, acrylic or watercolor canvas portraits of Donald Duck, no larger than 24” W x 36” H, are eligible.

Artists must first submit an original sketch, in any medium or size, of the planned artwork. The submission form, as well as full contest rules and additional details, can be found at the official D23 website. All finalists selected to have their works displayed will be eligible for two complimentary, four-day admission passes to the D23 Expo.

The creator of the winning portrait will receive an authentic “Duckster” – an award that Walt Disney personally commissioned in 1960 and which has been presented fewer than two dozen times to people who made significant contributions to the Walt Disney Studios. The last time a “Duckster” was awarded was nearly 20 years ago, and only a few of these rare, bronze statuettes of Donald Duck remain in the Walt Disney Archives. Among the past recipients of the “Duckster” are Clarence Nash, the original voice of Donald Duck, and famed Donald illustrator Carl Barks.

“What do you give a duck that has everything on his 75th birthday? You let the ones who love him most offer this most sincere form of flattery, of course,” said Steven Clark, head of D23. “Disney fans are some of the most passionate and creative people anywhere, and we can’t wait to see their fun and imaginative depictions of our feisty, yet lovable, leading duck!”

Since his first appearance in 1934’s Silly Symphony The Wise Little Hen, Donald Duck has been one of Walt Disney’s most popular creations, starring in more cartoons than Mickey Mouse himself. Donald’s a 21st-century icon, as well, starring in not one but two theme-park attractions: Mickey’s PhilharMagic at the Magic Kingdom and the Gran Fiesta Tour starring The Three Caballeros at Epcot. He’s been honored with a star on the Hollywood Walk of Fame, his webbed feet have been immortalized in front of the famed Grauman’s Chinese Theater, and he’s even a videogame star, having been featured prominently in Kingdom Hearts and its popular sequel.

Donald has appeared in more than 170 cartoons, movies and TV shows, and a celebrity of his magnitude has fans around the world. Whether they know him as Anders And (Danish), Donal Bebek (Indonesian), Paperino (Italian) or any other language, fans who are also members of D23 are invited to submit portraits that capture Donald’s unique, multi-faceted personality as part of the Donald Duck 75th Anniversary Portrait Contest.

Sketches of proposed portraits, which should be fun interpretations of everyone’s favorite duck and his complex personality, must be physically mailed or shipped to The Walt Disney Archives no later than Monday, June 15 (e-mail submissions cannot be accepted). Sketches will be reviewed and judged by a panel of Disney creative executives. Artists whose work has been accepted will be notified by Disney, and must complete and deliver their finished canvas portrait (in oil, acrylic or watercolor) no later than August 15, 2009.

The winning portrait will be announced during a special event at the D23 Expo on Saturday, September 12. The Donald Duck 75th Anniversary Portrait Contest is open to members in good standing of D23.

To become a member of D23, and to obtain more information on the only official community for Disney fans, visit http://www.disney.com/d23.